Objective: Aim of this study is to assess the role of Cancer Antigen (CA-125) in detection of ovarian malignancy in premenopausal women with ovarian mass.

Methods: This observational study was carried out in (blinded). It included 200 women who had preliminary diagnosis of adnexal mass whatever its nature. Adnexal masses were detected either clinically or by ultrasound.

Results: The study shows distribution of different pathologies of malignancy, stage of malignancy at diagnosis and benign spectrum in investigated population. The study also reveals CA-125 cutoff point 35.1 and sensitivity and specificity reached 93.1% and 92.2% respectively. Area under the Curve (AUC) was 0.998, Positive Prediction Value (PPV) was 91.7% and Negative Prediction Value (NPV) was 92.1.

Conclusion: According to our results CA-125 could be suitable as an ovarian cancer detection marker.

Ovarian cancer is one of the three most common malignant tumors in the female reproductive system. It has an insidious onset with a difficult early diagnosis [1]. In approximately, 70% of all cases of ovarian cancer, the disease is not diagnosed before reaching an advanced stage [2]. The 5-year survival rate associated with ovarian cancer is < 30% [3]. Over 90% of cases of ovarian masses detected in premenopausal and ≤ 60% in postmenopausal women are benign [4]. The early diagnosis of ovarian malignant tumor becomes a key factor in improving the survival rate of patients. Tools currently in use for differentiating between low- and high-risk patients with ovarian cancer are the tumor markers like Cancer Antigen-125 (CA-125) [5].

The tumor marker CA-125 has been used for 30 years for the monitoring of ovarian cancer, diagnosis, effective evaluation, and recurrence [6]. Although clinical application of CA-125 has been extensive, its specificity as a marker of malignant tumor or early diagnosis of ovarian cancer requires reassessment [7]. In premenopausal women, the detection of CA-125 in ovarian cancer sensitivity and specificity is not ideal because of the menstrual cycle, pregnancy and other effects [8]. Moreover, as there are no definite screening tools for ovarian malignancy and many pros and cons of tumor markers regarding their sensitivity and specificity? We specify our search in this study on the CA-125 level and its role in ovarian cancer detection due to its high sensitivity, non-invasiveness, and simplicity [3,6,7].

Thus, we are assessing in this study the role of CA-125 in detection of ovarian malignancy in premenopausal women with ovarian mass.

An observational cohort study was carried out in (blinded). The study was conducted from 2016-2018, according to the guidelines for good clinical practice for research and declaration of Helsinki. Premenopausal women with adnexal masses participated in the study. All participants signed an informed consent form submitted for approval by the Ethical Review Board of the faculty of medicine, (blinded). The study included (200) premenopausal women who had preliminary diagnosis of an adnexal mass which was detected clinically and by ultrasound scanning.

Women were recruited from the outpatient gynecological clinic. After signing an informed consent, all participants were subjected to the following:

The study shows that 27% of cases had malignant tumors and while benign tumors where diagnosed in 73% of cases. Three women with benign disease developed malignancy (Table 2).

Currently, CA-125 is frequently used to detect ovarian cancer before the onset of clinical signs, but CA-125 can increase in association with some physiological conditions such as pre-menopausal women and benign diseases in women suspicious of cancer. There are other negative points about CA-125 biomarker properties which are, its low sensitivity for early-stage detection, and low specificity related to ovarian cancer. High level of CA-125 in the other cancers such as endometrial, cervix, and lung cancers is reported [9].

Malignant epithelial ovarian tumors account for 90% of all malignancies of the ovary and are the fourth most common cause of tumor-related death in women [11].

In current study the cutoff point of CA-125 is 35.1 and sensitivity and specificity reached 93.1% and 92.2% respectively. Our results are supported by findings reported in a meta-analysis by Ferraro et al in 2013. They found that the specificity of CA125 for detecting ovarian cancer was 78% (95% CI 76-80) [14]. To describe tumor markers and screening tests, the Receiver Operating Characteristic (ROC) and Area under the Curve (AUC) are frequently employed since they represent a useful graphic tool for comparing biomarkers and algorithms. The ROC measures the discrimination of a test, i.e. its ability to distinguish between having disease and not having it for a given patient. In the study by Dikmen, et al. [15] the AUC for CA-125 was rather weak (0.78), suggesting that it was probably not the ideal marker for diagnosing ovarian cancer.

Moore, et al. [16] included borderline tumors in their analysis, within this study, the examination of benign cases versus all stages of epithelial ovarian cancer and borderline tumors revealed a ROC-AUC of 0.913. Within a setting of a multicenter prospective trial with central review and monitoring it seems plausible that a diagnostic test would perform slightly better. CA 125 is higher in healthy pre-menopausal patients [17]. These slightly higher normal values influence the performance of the tumor markers concerned. Although not significant, this can also be seen in a study by Van Gorp, et al. [12], the ROC-AUC of CA125 was higher in the post-menopausal group.

Our results are supported by a multicenter clinical trial validating the performance of HE4, CA-125 that suggesting that CA125 is superior to HE4 as a biomarker to detect ovarian cancer [18].

In contrast, according to Oranratanaphan, et al. [20], HE4 and ROMA compared to CA-125, had lower sensitivity and NPV, but higher specificity and PPV for differentiating between benign and malignant ovarian tumor. This result was consistent with that of the previous studies by Molina, et al. and Chan, et al. [21,22] were performed in 6 Asian countries including Thailand.

In conclusion, application of the CA-125 measurement for the diagnosis of ovarian cancer was found to be effective and it has good clinical application, which is useful for clinicians.

However, in 2021 a UK Collaborative Trial of Ovarian Cancer Screening (UKCTOCS) to investigate effect of screening in reducing deaths due to the disease. Their results revealed that long term multimodal or ultrasound screening didn’t reduce deaths from ovarian and tubal cancers. There was a decrease in incidence of stages III and IV of the disease with screening than stages I and II [24]. 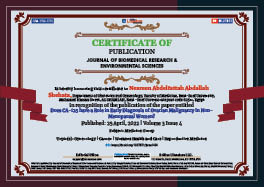